For every person we meet and every car we feature in NZCC there is a special story – whether linked to the owner’s past or simply the tale of a burning passion to own a particular classic car. However, this story
is particularly interesting because not only does the owner of this fairly radical VW Beetle, Chris Parkin, have a keen interest in classic cars and motorcycles, he is also passionate about art and the Museum Art Hotel which he owns. Late last year we were invited to stay at the Museum Art Hotel in Wellington and spent some time talking to Chris, the man behind this unique establishment.

Chris was born in the UK and immigrated to New Zealand when he was four years old. He grew up in the small rural town of Otaki where he attended the local school, and went on to study at Victoria University in Wellington, graduating with both MSc (Hons) and BCA degrees.

Chris spent the early part of his working career in the banking industry before he started operating the Museum Hotel (formerly the Michael Fowler Hotel) as a result of a bet with the Secretary of the Internal Affairs Department. He was also the driving force behind an extraordinary engineering feat – this involved saving the hotel from de- molition to make way for Te Papa in 1993 by, quite literally, moving the entire hotel across the road on railway tracks; it is the largest building in New Zealand to be relocated. This rescue mission led to Chris being named Wellingtonian of the Year in 1993 and, in 2006, he completed a $29 million nine-storey expansion of the hotel to a mix of hotel rooms and apartments.

It is located in the heart of Wellington – New Zealand’s arts and culture capital – and Chris Parkin’s creative influence is felt throughout the luxurious Museum Art Hotel. The hotel houses an extensive, private collection of contemporary New Zealand art – over 80 pieces – collected by Chris over the past 17 years.

Chris commissioned New Zealand artist, Lynne Sandri, to create a Museum Hotel Art Guide cataloguing the art. Guests may use the guide and take their own leisurely tour of the diverse art works on display throughout the hotel.

The hotel also offers a highly personalised service that includes beautifully furnished suites featuring sumptuous, yet modern décor, characterised by attention to detail and an intimate feel.
For those wanting to indulge in the very best fine-dining experience in Wellington, Hippopotamus – the hotel’s award-winning in-house restaurant – features authentic French-style cuisine by Laurent Loudeac. Chris established the French-themed and Versace-inspired Hippopotamus Restaurant in 2007, and it has since grown to be the most successful hotel restaurant in New Zealand, with the major- ity of its business coming from outside the hotel.

The hotel is on Yahoo’s list of the world’s top 10 hotels. 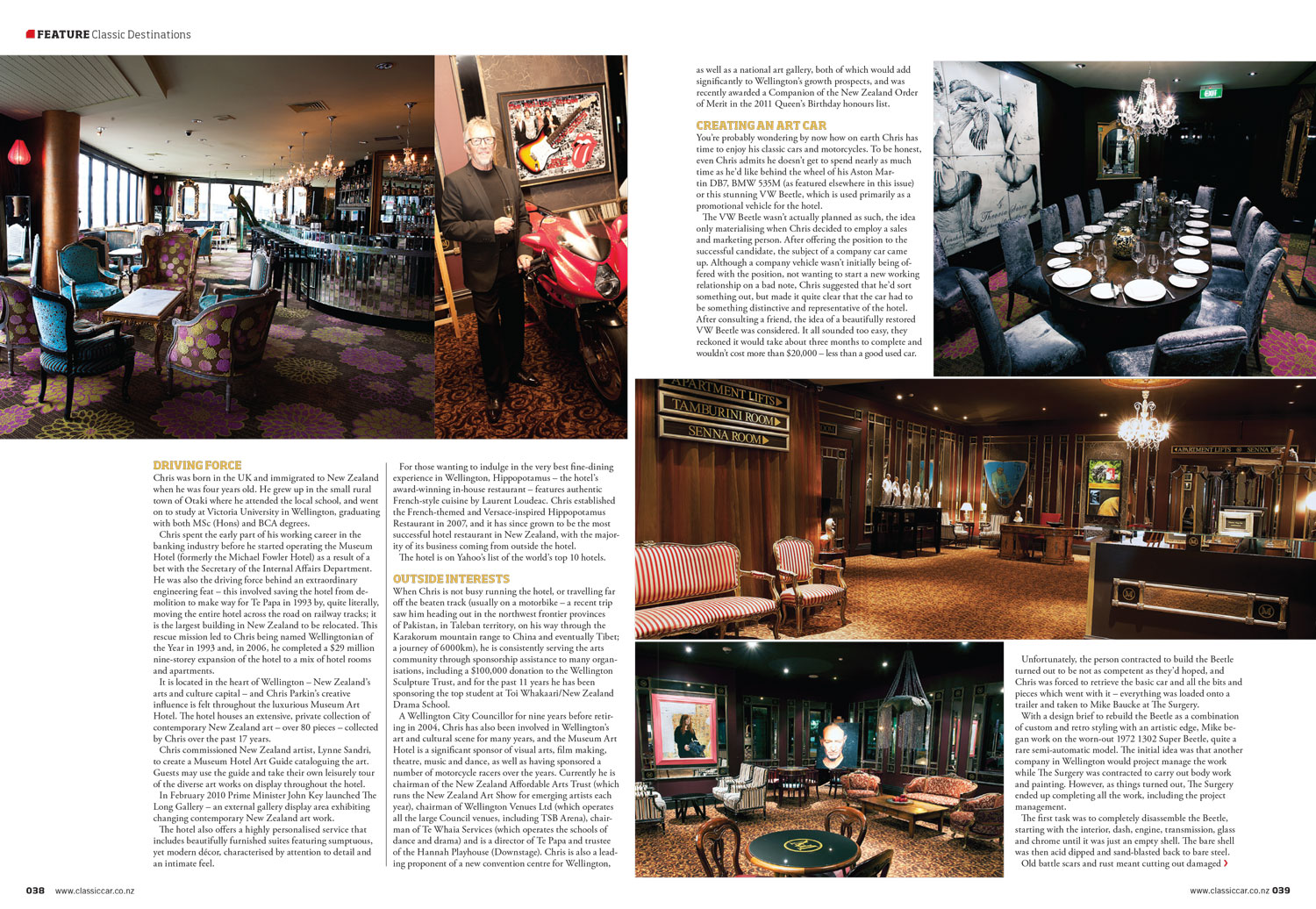 When Chris is not busy running the hotel, or travelling far off the beaten track (usually on a motorbike – a recent trip saw him heading out in the northwest frontier provinces
of Pakistan, in Taleban territory, on his way through the Karakorum mountain range to China and eventually Tibet; a journey of 6000km), he is consistently serving the arts community through sponsorship assistance to many organ- isations, including a $100,000 donation to the Wellington Sculpture Trust, and for the past 11 years he has been sponsoring the top student at Toi Whakaari/New Zealand Drama School.

A Wellington City Councillor for nine years before retir- ing in 2004, Chris has also been involved in Wellington’s art and cultural scene for many years, and the Museum Art Hotel is a significant sponsor of visual arts, film making, theatre, music and dance, as well as having sponsored a number of motorcycle racers over the years. Currently he is chairman of the New Zealand Affordable Arts Trust (which runs the New Zealand Art Show for emerging artists each year), chairman of Wellington Venues Ltd (which operates all the large Council venues, including TSB Arena), chair- man of Te Whaia Services (which operates the schools of dance and drama) and is a director of Te Papa and trustee of the Hannah Playhouse (Downstage). Chris is also a lead- ing proponent of a new convention centre for Wellington, as well as a national art gallery, both of which would add significantly to Wellington’s growth prospects, and was recently awarded a Companion of the New Zealand Order of Merit in the 2011 Queen’s Birthday honours list. 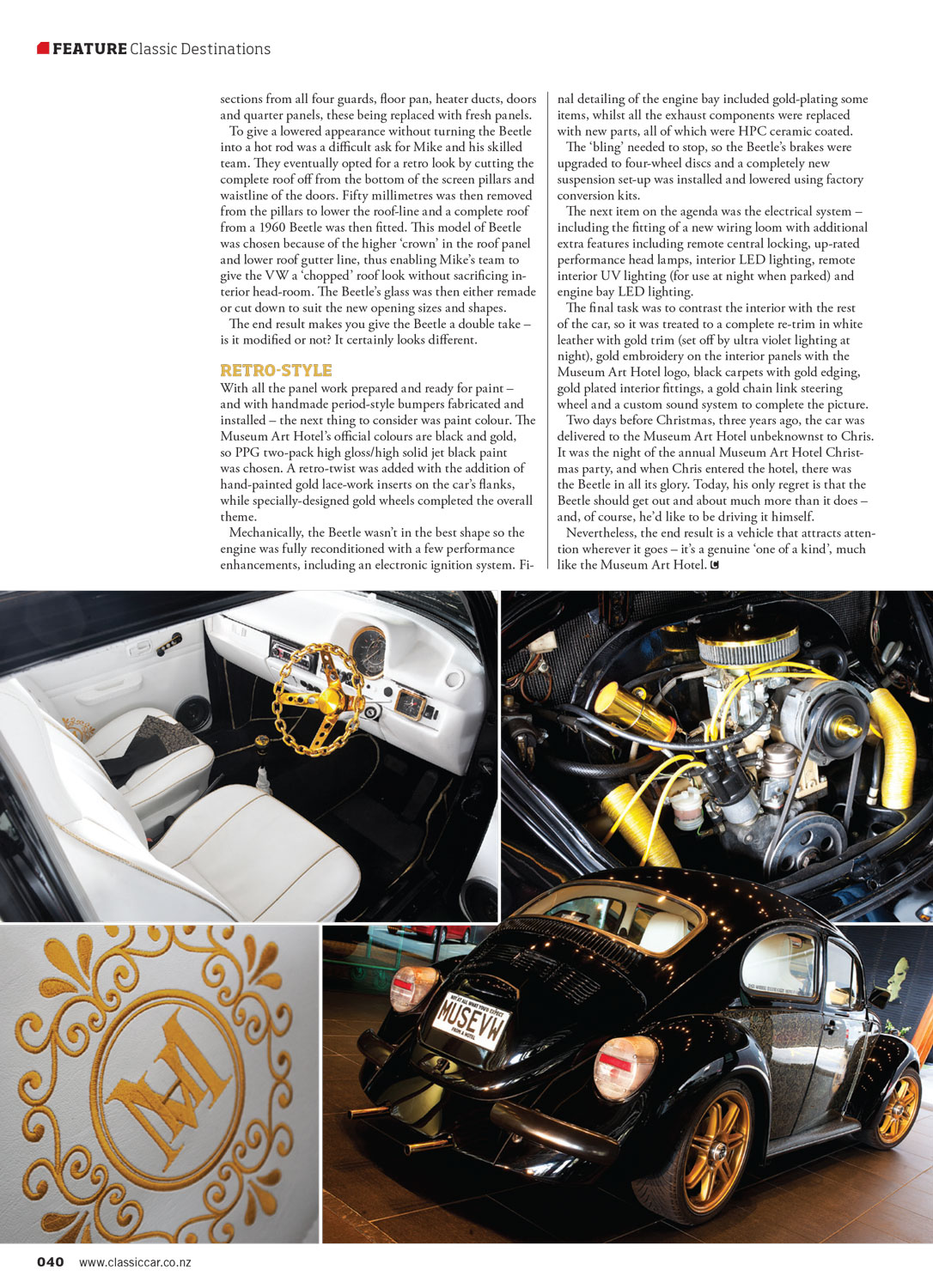 You’re probably wondering by now how on earth Chris has time to enjoy his classic cars and motorcycles. To be honest, even Chris admits he doesn’t get to spend nearly as much time as he’d like behind the wheel of his Aston Martin DB7, BMW 535M (as featured elsewhere in this issue) or this stunning VW Beetle, which is used primarily as a promotional vehicle for the hotel.

The VW Beetle wasn’t actually planned as such, the idea only materializing when Chris decided to employ a sales and marketing person. After offering the position to the successful candidate, the subject of a company car came
up. Although a company vehicle wasn’t initially being offered with the position, not wanting to start a new working relationship on a bad note, Chris suggested that he’d sort something out, but made it quite clear that the car had to be something distinctive and representative of the hotel. After consulting a friend, the idea of a beautifully restored VW Beetle was considered. It all sounded too easy, they reckoned it would take about three months to complete and wouldn’t cost more than $20,000 – less than a good used car.

Unfortunately, the person contracted to build the Beetle turned out to be not as competent as they’d hoped, and Chris was forced to retrieve the basic car and all the bits and pieces which went with it – everything was loaded onto a trailer and taken to the team at The Surgery.

With a design brief to rebuild the Beetle as a combination of custom and retro styling with an artistic edge, The Surgery began work on the worn-out 1972 1302 Super Beetle, quite a rare semi-automatic model. The initial idea was that another company in Wellington would project manage the work while The Surgery was contracted to carry out bodywork and painting. However, as things turned out, The Surgery ended up completing all the work, including the project management.

The first task was to completely disassemble the Beetle, starting with the interior, dash, engine, transmission, glass, and chrome until it was just an empty shell. The bare shell was then acid dipped and sand-blasted back to bare steel.

Old battle scars and rust meant cutting out damaged sections from all four guards, floor pan, heater ducts, doors and quarter panels, these being replaced with fresh panels. To give a lowered appearance without turning the Beetle

into a hot rod was a difficult ask for The Surgery’s skilled team. They eventually opted for a retro look by cutting the complete roof off from the bottom of the screen pillars and waistline of the doors. Fifty millimetres was then removed from the pillars to lower the roof-line and a complete roof from a 1960 Beetle was then fitted. This model of Beetle was chosen because of the higher ‘crown’ in the roof panel and lower roof gutter line, thus enabling The Surgery to give the VW a ‘chopped’ roof look without sacrificing interior head-room. The Beetle’s glass was then either remade or cut down to suit the new opening sizes and shapes.

The end result makes you give the Beetle a double take – is it modified or not? It certainly looks different.

With all the panel work prepared and ready for paint – and with handmade period-style bumpers fabricated and installed – the next thing to consider was paint colour. The Museum Art Hotel’s official colours are black and gold,
so PPG two-pack high gloss/high solid jet black paint
was chosen. A retro-twist was added with the addition of hand-painted gold lace-work inserts on the car’s flanks, while specially-designed gold wheels completed the overall theme.

Mechanically, the Beetle wasn’t in the best shape so the engine was fully reconditioned with a few performance enhancements, including an electronic ignition system. Final detailing of the engine bay included gold-plating some items, whilst all the exhaust components were replaced with new parts, all of which were HPC ceramic coated.

The ‘bling’ needed to stop, so the Beetle’s brakes were upgraded to four-wheel discs and a completely new suspension set-up was installed and lowered using factory conversion kits.

The next item on the agenda was the electrical system – including the fitting of a new wiring loom with additional extra features including remote central locking, up-rated performance headlamps, interior LED lighting, remote interior UV lighting (for use at night when parked) and engine bay LED lighting.

The final task was to contrast the interior with the rest of the car, so it was treated to a complete re-trim in white leather with gold trim (set off by ultraviolet lighting at night), gold embroidery on the interior panels with the Museum Art Hotel logo, black carpets with gold edging, gold plated interior fittings, a gold chain link steering wheel and a custom sound system to complete the picture.

Two days before Christmas, three years ago, the car was delivered to the Museum Art Hotel unbeknownst to Chris. It was the night of the annual Museum Art Hotel Christ- mas party, and when Chris entered the hotel, there was
the Beetle in all its glory. Today, his only regret is that the Beetle should get out and about much more than it does – and, of course, he’d like to be driving it himself.

Nevertheless, the end result is a vehicle that attracts attention wherever it goes – it’s a genuine ‘one of a kind’, much like the Museum Art Hotel.