At NZ Classic Car, we’re always enthused and fascinated by the incredible variety of classic cars that exist in this great country of ours. They range from Austins to Zodiacs, Lamborghinis and Ferraris to Morris Minors and Javelins – and all

of them come with their own unique stories and with owners who are equally enthusiastic and passionate about what their favourite marque means to them.

Every once in a while a vehicle comes along that we’d consider unusual or unique for whatever reason, such as our recently featured aero-engined Riley or perhaps the cute, lime-green Eastern European Trabant that
we featured earlier in the year. And that brings us to this stunning

FJ Holden ute. As you read this story it’ll become rather obvious what makes it so unique, and a stand-out from the crowd. 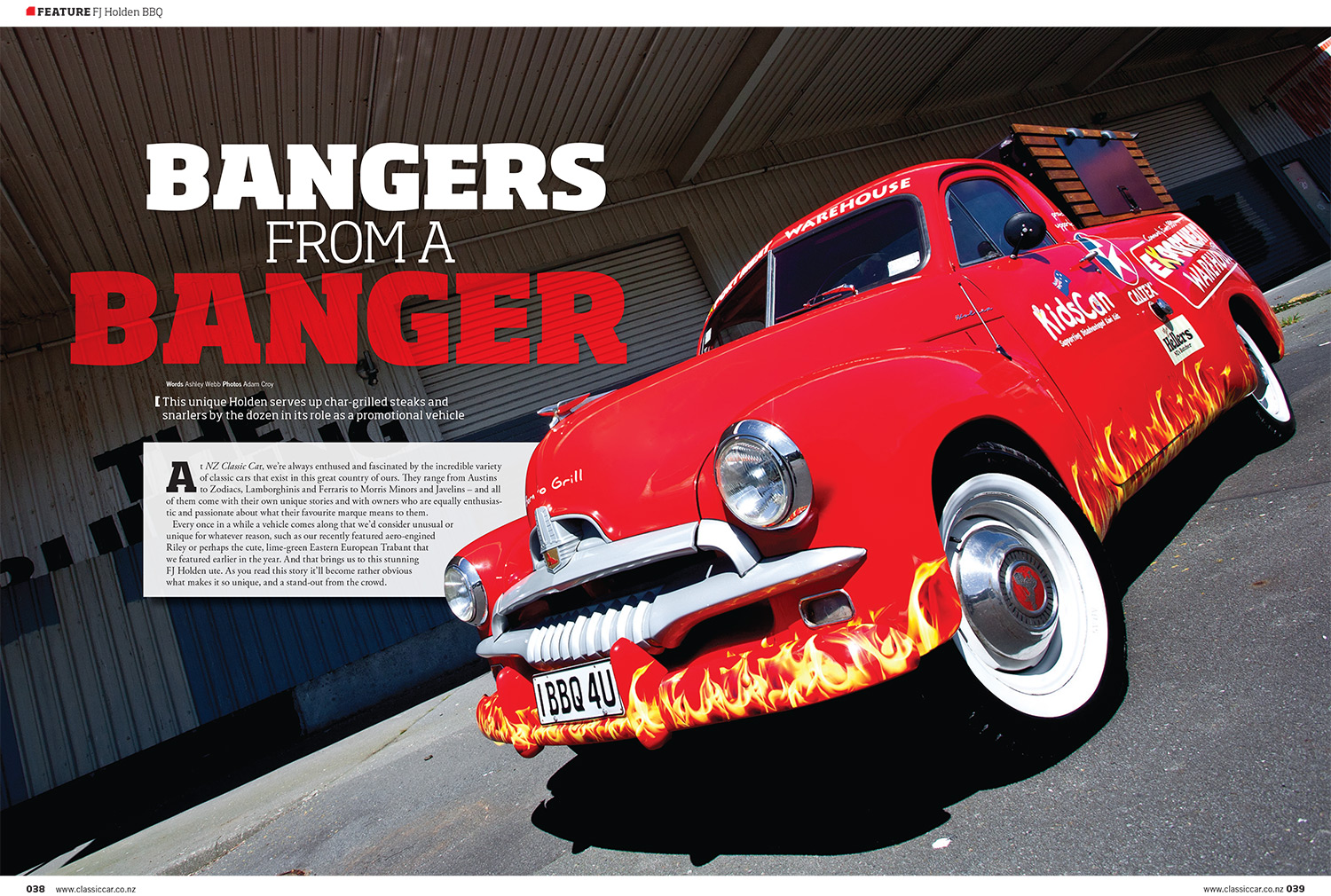 It all started when Export Meat Warehouse, a national chain of 23 franchised and independently owned butcher shops, decided to create a totally unique mobile BBQ.

The idea for this BBQ was sparked by the story of an adventurous fellow from Australia called Tom O’Toole, a baker from Beechworth in Victoria. O’Toole travelled all around Australia in an old Model T van, even going to
the very northernmost tip of Australia where people said it couldn’t go. Hamish Preston, managing director of Export Meat Warehouse, was so inspired by Tom’s story that he decided to create something similar in New Zealand.

The Export Meat Warehouse head office team scoured the country for a suitable vehicle, and in addition Hamish Preston also approached well-known vehicle restoration team at The Surgery, to discuss ideas on a promotional vehicle based on a 1930s-1940s pick-up truck capable of carrying a portable BBQ in the back that could be taken out and set up at shows and special events.

Both Hamish and the team at The Surgery kept an eye out on local auction websites and in the Cars for Sale section in NZ Classic Car, looking for the right vehicle to use. After some intense searching finally, an FJ Holden ute came up for sale on the internet and both Hamish and The Surgery decided to go to Nelson, where the ute was located, to take a further look.

The old FJ was the perfect solution for what Hamish wanted to achieve and, after a bit of haggling with the owner, a deal was struck and the project began.

The vehicle the pair had finally settled on was a 1955 FJ Holden ute, a classic vehicle in every sense of the word.

The FJ has indeed become a celebrated Australian icon and, in fact, the trusty FJ undoubtedly played its part in cementing Holden’s place as building Australia’s most popular car. Today, Holden lovers, restorers and those wish- ing to modify this iconic classic recognise that unmistakable, era-de ning chrome grille and stylish monogrammed hubcaps. Indeed, that distinctive front grille assembly has since made the FJ one of Australia’s most familiar faces.

Once the FJ ute was in the hands of The Surgery, work began on turning this old banger into a mobile BBQ, a restoration project that would last seven months.

The task in hand was to create a vehicle which a wide sector of the New Zealand population could relate to, plus it needed to have the feel of those old-time Kiwi golden summers – and so the task was to transform an old, retired icon into a genuine working classic.

Hamish’s requirements for the vehicle were quite specific and included such things as upgraded brakes, suspension, engine and gearbox, but the vehicle still had to retain its classic personality.

The FJ ute also needed to be user-friendly and reliable, as it was to be driven by a wide range of people and be capable of carrying heavy loads at times.

Another requirement was that the old FJ had to have a few creature comforts on board (for those long trips up country) and be capable of keeping up with the general traffic on the roads.

Last but by no means least, it needed to be self-contained with a complete BBQ that could be easily and quickly
set up and put away and, just as importantly, the ute still needed to look original to the untrained eye.

The first job on the agenda for e Surgery was to develop a suitable design that was not only practical, but that would also comply with the requirements set down by Hamish and his team at the Export Meat Warehouse. The Surgery produced dozens of sketches, working drawings and innovative ideas which ultimately came together to produce an end result which has since become a highly sought after (and very cool) marketing tool for Hamish. Basically, the result of The Surgery’s work ended up being a cross between a camper van, food catering vehicle, mobile marketing machine and classic car all rolled into one – complete with a bright red paint job and whitewall tyres. 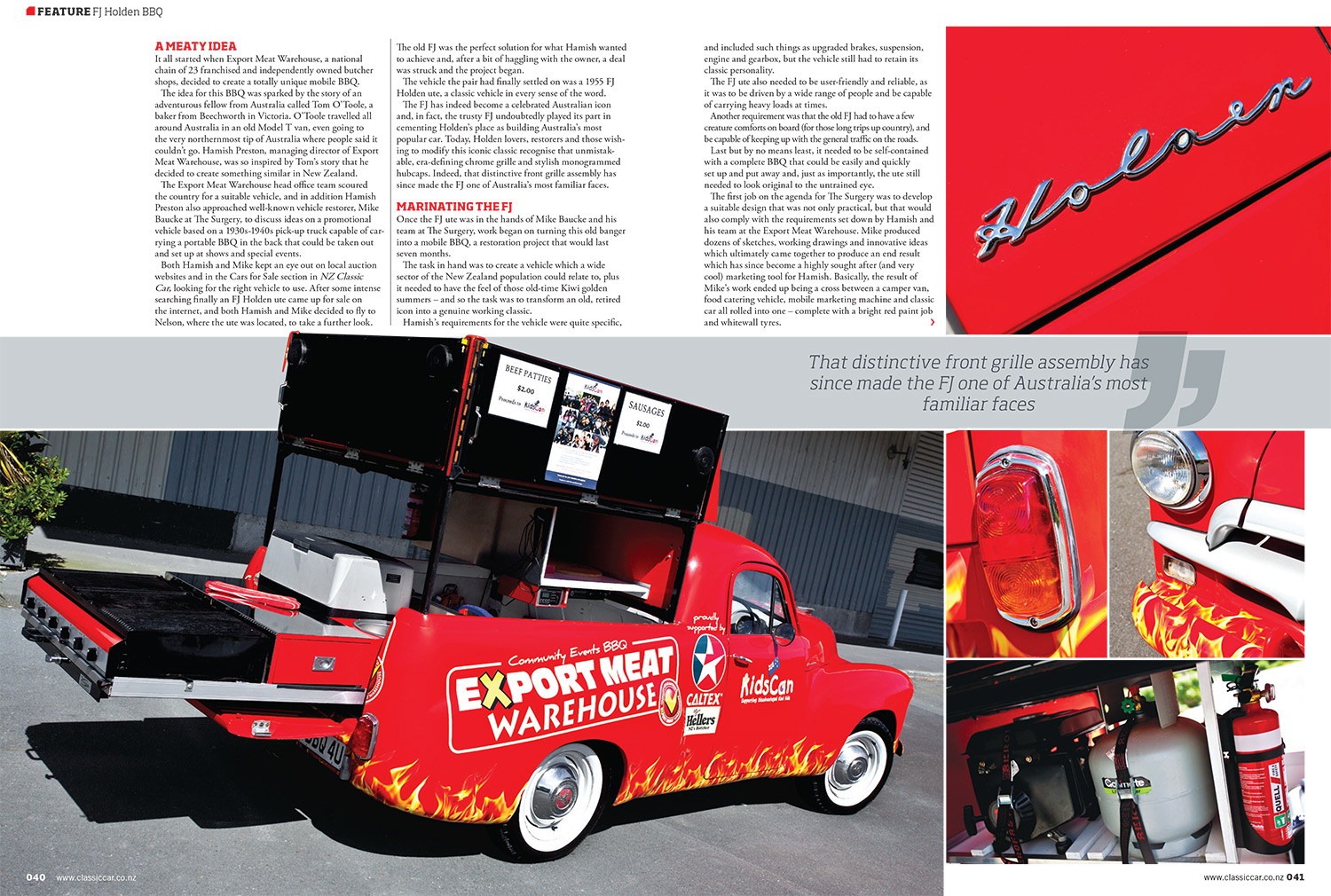 In actual fact, the FJ Holden was in fairly tidy original condition, albeit a little worn, providing The Surgery’s team with a good base to work from. The first step was to completely strip all the mechanicals, interior, engine, gearbox, suspension and electrics out of the ute so that design work, mechanicamodificationsns engineering, upgrades and over- hauls could be carried out.

e engine was then mated to a Holden Commodore ve-speed gearbox, and a heavy-duty clutch was added to take care of any extra weight. e next step was to install the ball-jointed (from original king pin) front suspension, but not before the front cross member was upgraded to

Once the drivetrain was completely installed and fully

checked to ensure everything worked and operated as it should, the vehicle was completely disassembled again so the panel work and straightening could commence.

e bodywork on the FJ was fairly sound to start with for its age, considering that The Surgery and Hamish had spent some time looking for a good example. e Surgery discovered that the FJ ute was previously painted white, and there were visible areas of surface rust once the shell was stripped back to bare steel which required a small amount of cutting and welding operations before it was repaired and straightened.

When the body was perfectly straight and prepared for painting it was then fully sprayed in Export Meat Ware- house colours using PPG two-pack products, and the company graphics and sponsor logos were applied. e body was also fully rust-proofed and under sealed at this time.

Now the body was painted it was time for the reassembly of all the new and revised mechanical and suspension components, as well as a 12V electric heater/demister, remote electric central locking system, up-rated headlamps, 12V system and heavy-duty 12V starting battery. Originally the FJ didn’t have indicators, so an indicator switch was designed and fitted to the steering column and the indicators placed inside the front side lamps and tail lamps. e windscreen wipers were converted from vacuum to dual speed electric wipers and inertia seat belts and centre lap belts were fitted. To add the finishing touches to the ute’s interior, a CD player with iPod plug and two four-inch speakers were installed in the doors.

Once the FJ Holden Ute was fully restored and looking a mil- lion dollars, the hardest and most challenging component of this entire project had to be tackled – installing the BBQ.

After much research and countless design concepts, The Surgery created the overall effect for the canopy. e look was one of a stylised wooden ‘crate’ as seen back in the 1950s, complete with black boards on the sides for those special sale items. e canopy has exterior low watt- age lighting that lights up the black boards at night, plus red strip lighting around the underbody to highlight the flames which can be left on at night when the FJ is parked up in high traffic areas for maximum exposure. ey can be turned on and o using the remote central locking control. e canopy doors open upwards and lock together to create large signage areas. 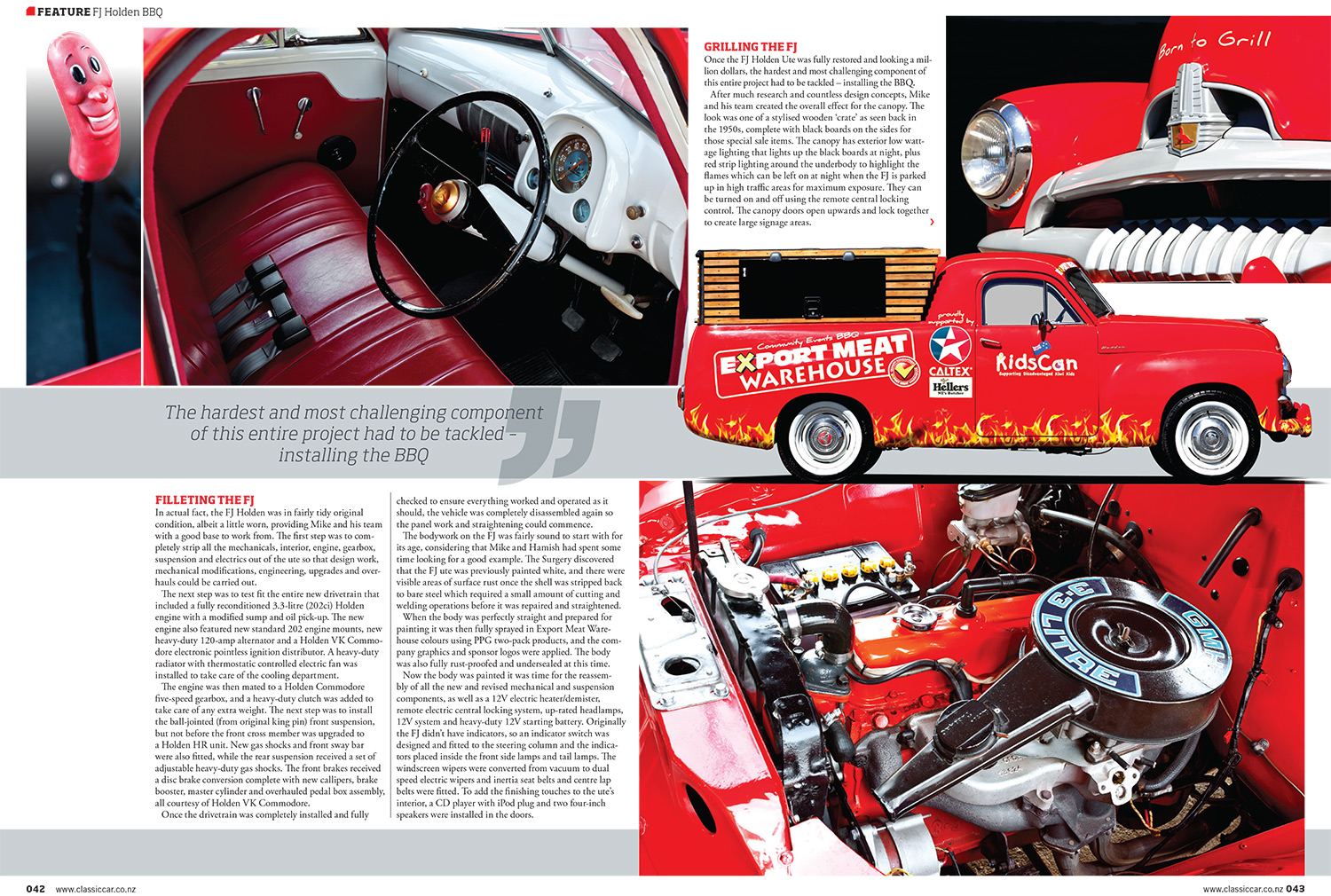 They also have exterior speakers concealed inside which are linked up to a second sound and PA system located inside the canopy.

In a matter of minutes, with one quick action the entire kitchen-catering contents of the canopy slide out on a deck that carries a self-contained stainless wash hand basin (with electric water tap), a water tank with hot and cold water, a full six-burner BBQ, cook/prep top/storage drawer and 12V fridge. All ready for use straight away.

is amazing creation also includes interior adjust-
able LED lighting, a built-in electronic Intellicharge self-charging system with two storage deep-cycle ‘house’ batteries that allow the complete system to run under its own power for up to nine hours. e batteries can recharge while driving or can be plugged into 240V mains. There is an on-board petrol generator t , if required. In addition, there are inbuilt safety features such as an electronic gas extractor, re extinguisher and the main power switch that can use the ‘house’ batteries to start the FJ if the starting battery runs at. Full test and certification of complete vehicle and modifications were completed.

Called the BBQ Ute (registration IBBQ4U), the BBQ Ute is totally self-contained with its own fridge, hot running water, gas BBQ, workbench and sound system, all the equipment needed to cook a superb banger.

Export Meat Warehouse has selected KidsCan charity as its primary charity of choice, which provides disadvantaged Kiwi children with shoes, raincoats, food, and school books – it’s also supported by the All Blacks. But there is also room for local charities to be supported.

e FJ Holden BBQ Ute will be used at charity events right around the country, as it travels to members’ stores, and to special events. Whenever it is out on the road, the ute attracts a huge amount of attention – it really needs to be seen to be believed, as it’s one of those interesting, very unique vehicles that we can all appreciate and admire. 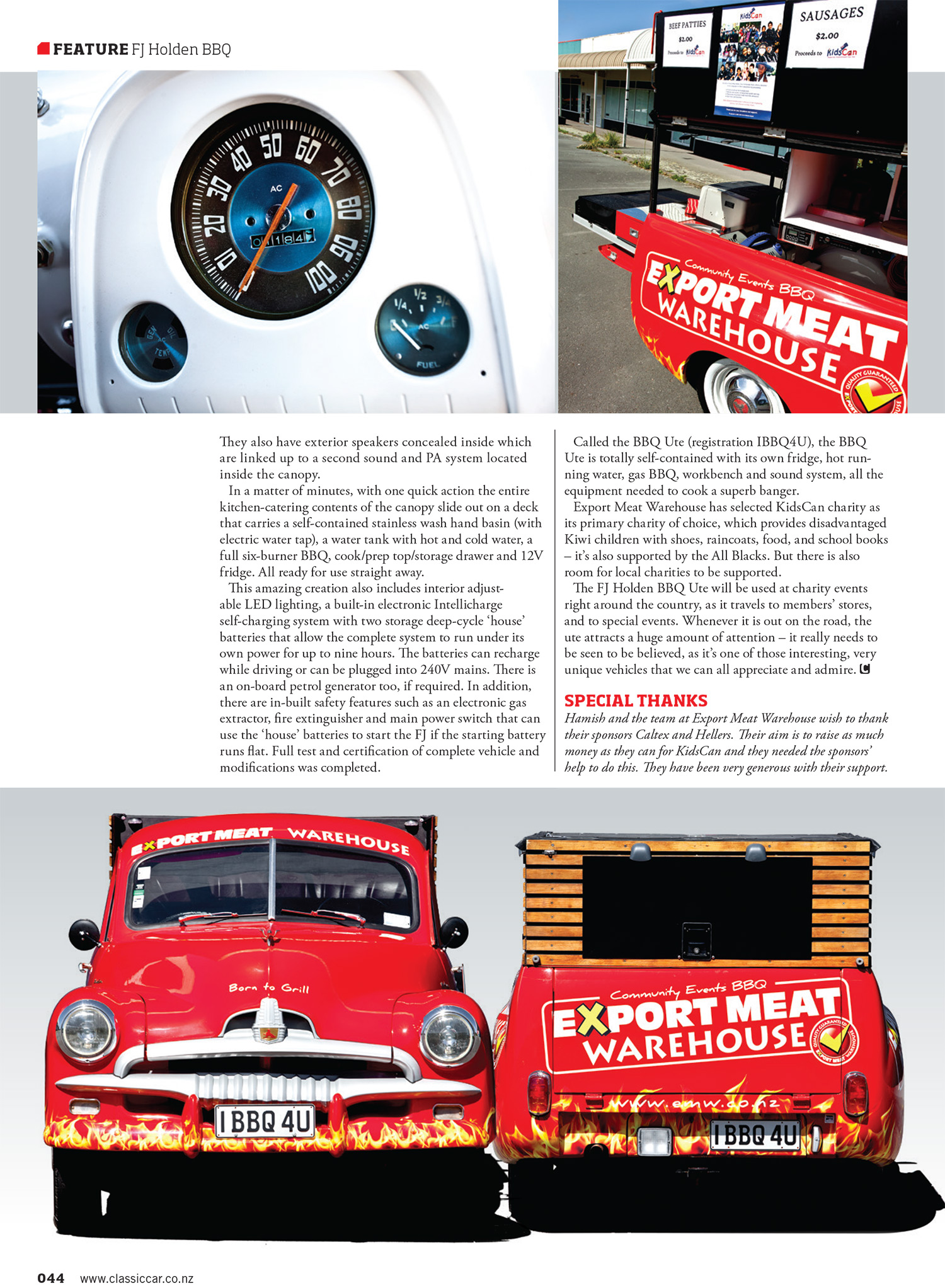