The road into this story is a long and winding one, which begins when three of the Muir brothers — Tony, Neville, and Guy — began developing a 121-lot subdivision in Ngaio, Wellington, in 1970. Tony initially owned a 1965 Land Rover, and, in 1968, he and Guy purchased two new Austin Gipsys, originally designed as competitors to the Landy. In 1976, the brothers replaced the Gipsys with two new Toyota Land Cruisers (these days referred to as ‘FJ40s’), and, in 1978, the three brothers formed a new company, Ridvan Garden Developments Ltd.
The Toyota FJ40s proved to be the most reliable, capable, and tough vehicles the brothers had ever owned, and they kept them for more than 20 years. Both families traveled all over New Zealand towing caravans, driving thousands of kilometers, getting off-road whenever they could, and generally using the vehicles as they were intended, long before the days of mainstream SUVs.

It’s hardly surprising they were so impressed, given that the Toyota FJ40 Land Cruiser is possibly one of the best off-road vehicles ever produced, and arguably stands alone as the most reliable, long-lasting, and virtually unbreakable vehicle, one which can get you anywhere you need to be. This sturdy machine has an enviable reputation for needing little-to-no modification straight out of the factory, as its stock four-wheel drive is capable of overcoming just about any obstacle in its path. Even today, FJ40s can be found just about anywhere in the world with several hundred thousand kilometres and the stock engine still running strong.

Throughout the ’70s and ’80s, Tony and Guy were heavily involved as volunteers in Civil Defence. Tony was a warden for One Mike (the Ngaio area) and, later, northern suburb controller at Sub-Area One. On a number of occasions, Tony organized Civil Defence exercises and demonstrations at school fairs and Wahine commemorations, as well as emergency-services training exercises at which both Cruisers were front and centre, kitted out with sirens and beacons. And when a civil emergency was declared during the floods of December 1976, the FJ40s were put to work doing what they do best.

The vehicles proved their worth time and again, but, unfortunately, their only flaw — their tendency to rust — reared its ugly head, so, after many years, this issue meant that the Land Cruisers were eventually all sold. 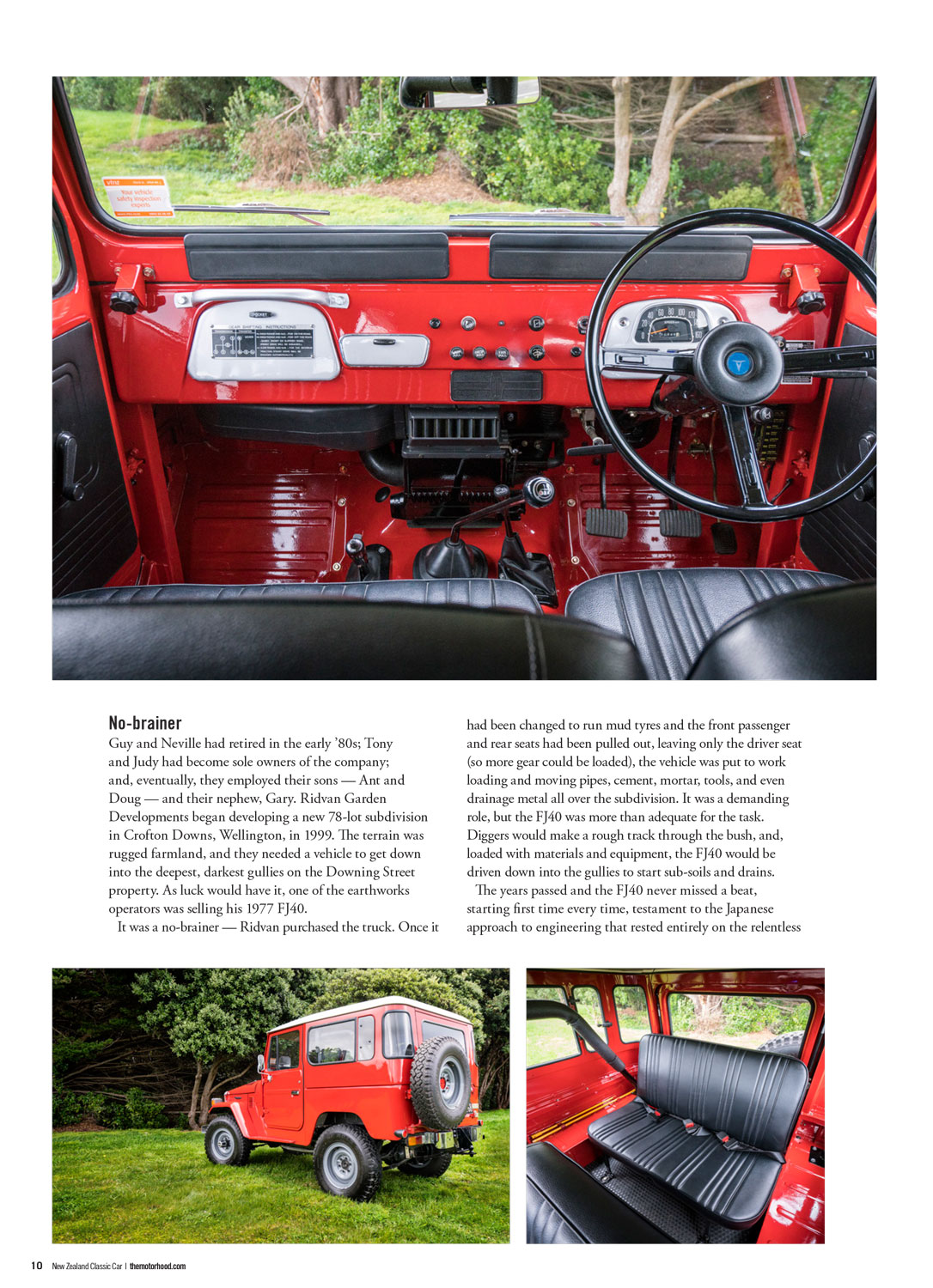 Guy and Neville had retired in the early ’80s; Tony and Judy had become sole owners of the company; and, eventually, they employed their sons — Ant and Doug — and their nephew, Gary. Ridvan Garden Developments began developing a new 78-lot subdivision in Crofton Downs, Wellington, in 1999. The terrain was rugged farmland, and they needed a vehicle to get down into the deepest, darkest gullies on the Downing Street property. As luck would have it, one of the earthworks operators was selling his 1977 FJ40.

It was a no-brainer — Ridvan purchased the truck. Once it had been changed to run mud tyres and the front passenger and rear seats had been pulled out, leaving only the driver seat (so more gear could be loaded), the vehicle was put to work loading and moving pipes, cement, mortar, tools, and even drainage metal all over the subdivision. It was a demanding role, but the FJ40 was more than adequate for the task. Diggers would make a rough track through the bush, and, loaded with materials and equipment, the FJ40 would be driven down into the gullies to start sub-soils and drains.

The years passed and the FJ40 never missed a beat, starting first time every time, a testament to the Japanese approach to engineering that rested entirely on the relentless  pursuit of perfection. It was never an option to adopt the philosophy of ‘If it ain’t broke, don’t fix it’, as the company would prefer that it never broke at all. After all, why replace something when you can build it right the first time? This is undoubtedly why the quality and durability of the FJ’s transmission and suspension are legendary. Take the leaf-spring suspension, for example — it’s absolutely suited for a heavy vehicle like the FJ, spreading the weight around evenly; plus, it actually obviates the need for additional weight from the extra parts that you would need with coil suspension.

Sadly, after receiving as much punishment as Ridvan’s harshest drivers could throw at it, the bodywork had taken a pounding and rust had set in.

Then, tragedy — parked on a vacant section surrounded by finished and half-built houses, the FJ was stolen. Police were informed but advised that the chances of recovery were virtually nil. 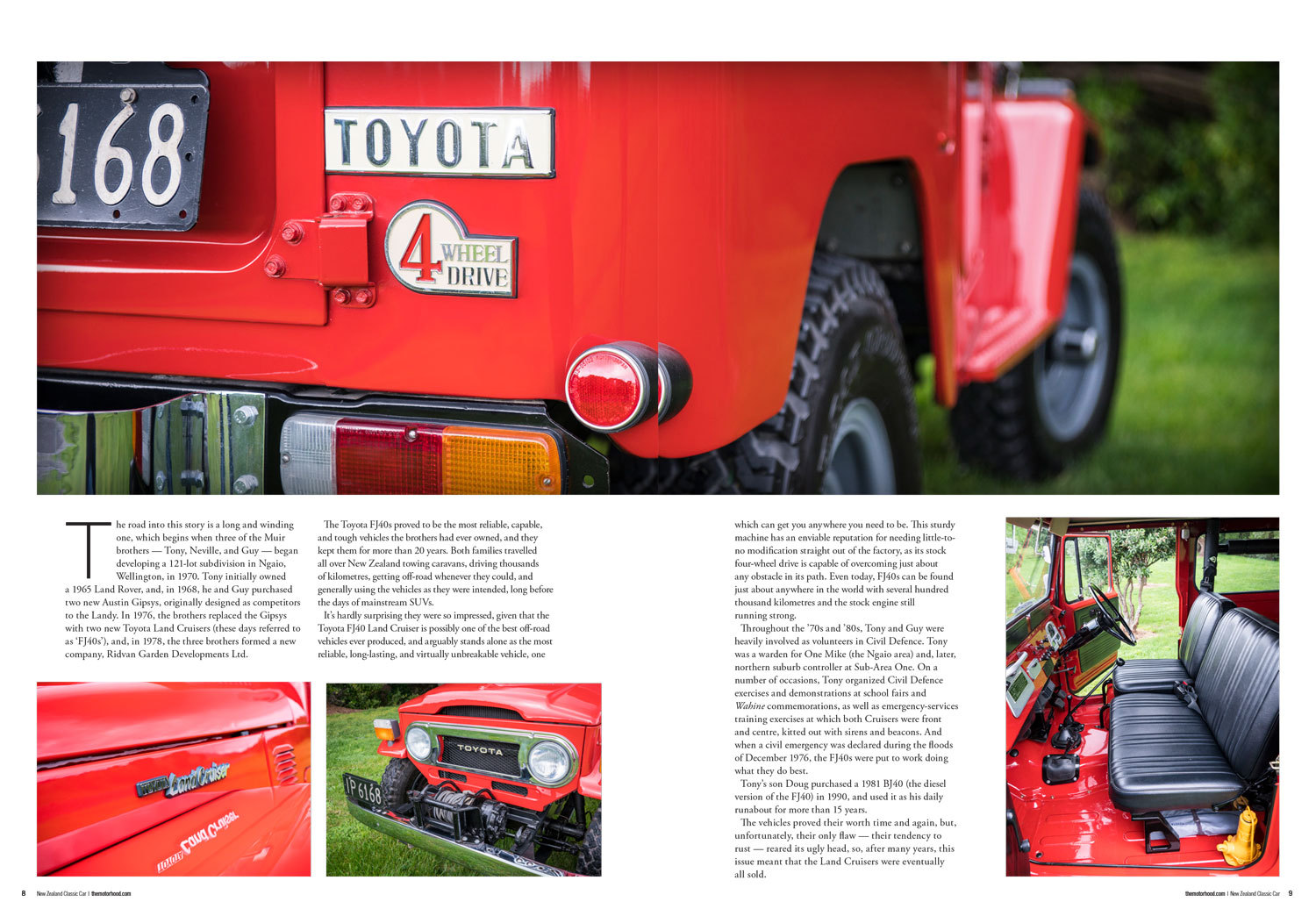 However, on Father’s Day 2009, a friend was at his local church when he looked over the fence into the neighbour’s property and saw, partially hidden under an old tarpaulin, an FJ40. After looking at it a little more closely, he rang Doug, who went around to the church and verified it was Ridvan Garden Developments’ missing Cruiser. Police were told, and the vehicle was recovered and started first time once a new battery had been installed. The stolen vehicle had been driven from Crofton Downs to Titahi Bay. For two years, it had been parked under a tarpaulin just 800m, as the crow flies, from Doug’s back door. 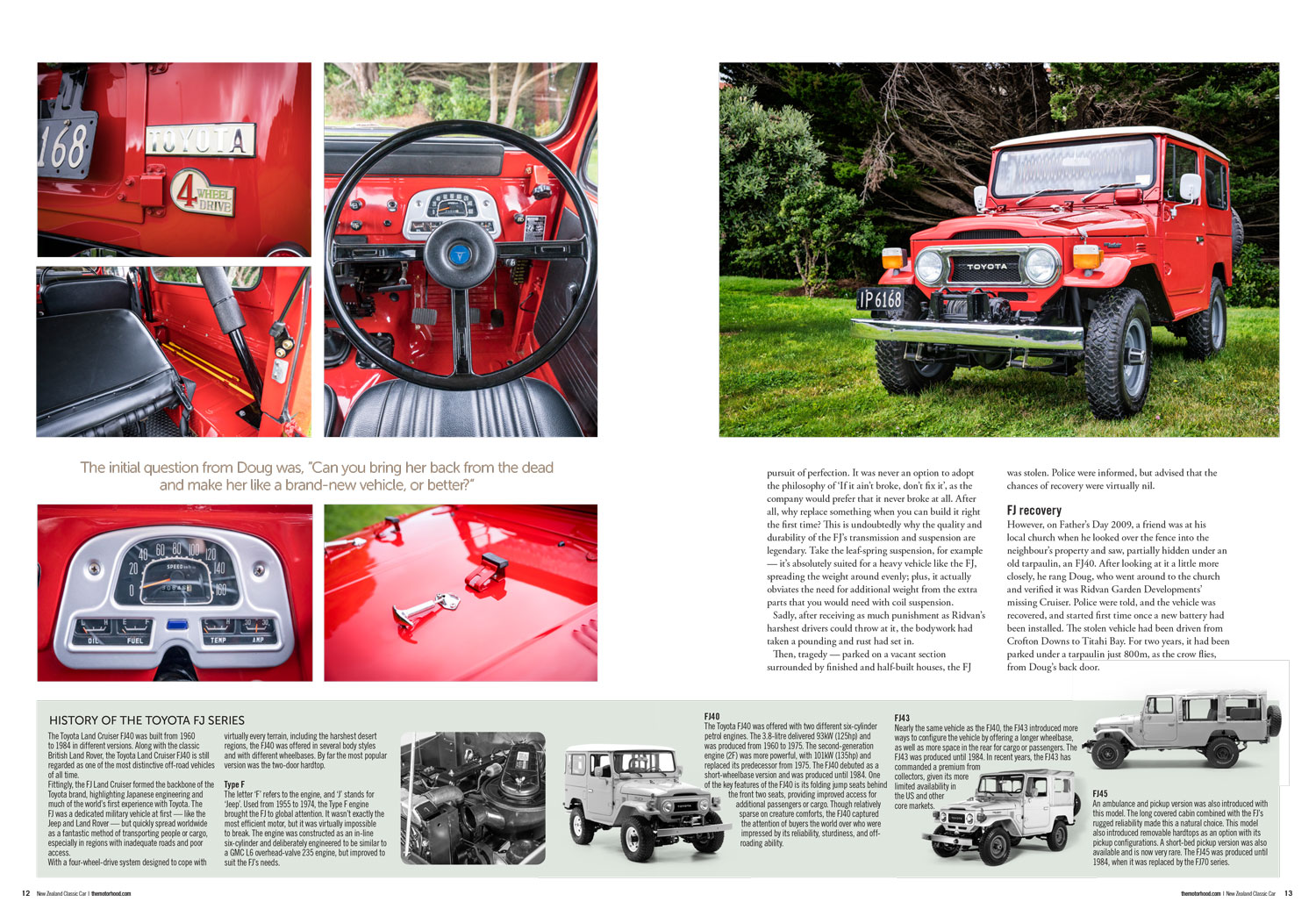 With earthworks on the subdivision completed, the vehicle was no longer required for its workhorse capabilities, so the decision was made to restore the FJ40 to its former glory. Doug sourced body panels and many other parts from all over New Zealand and overseas, often dropping in on a Sunday evening to show Tony and Judy his latest find. Finally, all the parts were located, and the skilled team at The Surgery in Tawa went to work.

The team at The Surgery knew right from the start of the project that the FJ40 was something very special to Doug and the rest of the Muir family. It may have been just an FJ40 to most people, but, to the Muirs, it may as well have been an F40!

The initial brief from Doug was, “Can you bring her back from the dead and make her like a brand-new vehicle, or better?”
The answer from The Surgery was a definite, “Yes —we would love to take up that challenge.”

When the Land Cruiser initially arrived at The Surgery, it was in an extremely sad and rusted state — some would have called it a basket case. Every panel, including the chassis, had severe rust, so the decision was made to completely disassemble the FJ40 down to every last nut and bolt, and then completely acid-dip strip all the body and loose panels back to bare steel. Very early in the project, they discovered that there were very few new steel panels available for the many rust repairs needed, so the mission was to fabricate 99 per cent of all the new panels required for the restoration. 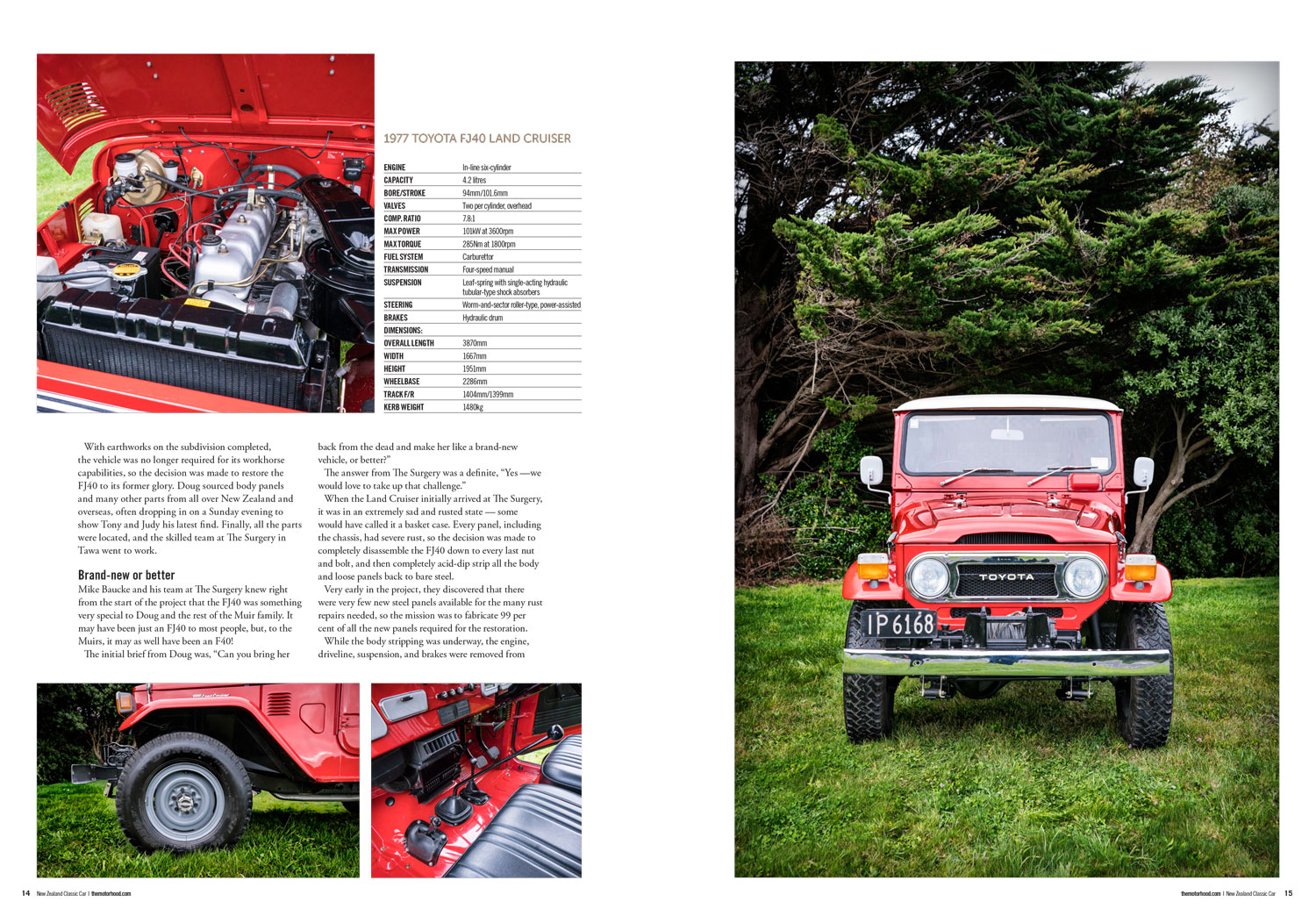 While the body stripping was underway, the engine, driveline, suspension, and brakes were removed from chassis. The engine and transmission, clutch and differential were completely stripped and reconditioned, while the entire braking system received a complete overhaul that included all new parts, master cylinder, booster, brake lines, wheel cylinders, calipers, discs, drums, and fittings. In addition, new springs and shock absorbers were fitted, the power steering was overhauled, and the engine received a new carburettor, an entire new exhaust system and a completely refurbished cooling/ heating system. A new wire loom was fitted, and all the dash gauges and switches were meticulously pulled apart and overhauled back to original condition.

The chassis was completely restored and painted in high gloss black, and the body received a full repaint
in a factory-formulated colour using all PPG two-pack products. The interior also got the same treatment, with new interior upholstery to factory spec and seat belts.

The only changes or improvements from the original vehicle were the design and installation of remote central locking, a GPS alarm, and a colour change to a factory option, Freeborn Red — with the help of Union Hardware and PPG, Mike had managed to track down the original factory formula.

A complete and comprehensive rust-proofing treatment was also carried out, something which the FJ40s never had from new — which is why they rusted so badly! — and, to top it all off, the finished painted surfaces were coated with a ceramic-paint protective coating, so, 20 years from now, it will still take pride of place in the Muir family garage,
as a fitting tribute to the several Land Cruisers that helped build the Muir family business. 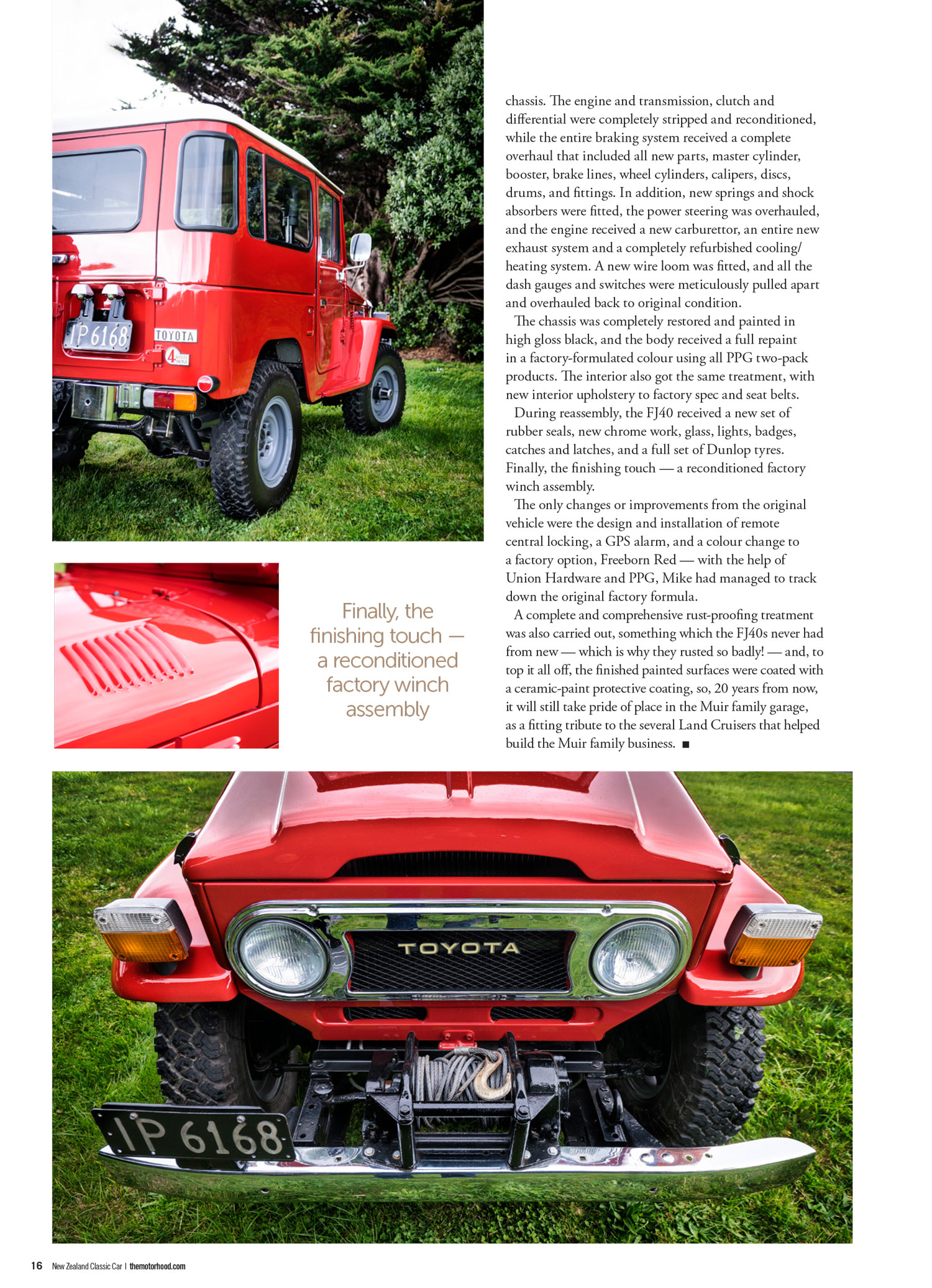