It’s probably fair to assume that the city of Auckland has more classic cars tucked away than any other in the country. Having said that, I reckon on a per-head

of population basis many other regions would win the
count hands down. Take the South Island as an example, I know it’s made up of several regions, but my guess is there are more classic cars squirreled away in barns, sheds and garages per head of population than just about anywhere else on the planet. I mention this because at NZCC HQ we’re continually sent a huge amount of emails and letters from enthusiasts all over the country with pictures of their wonderful classic cars, or their project cars in various stages of restoration. It’s fantastic to see. We appreciate everyone’s efforts in keeping us informed and look forward to featuring many of these cars amongst our pages in future.

That preamble brings us to Wellington and this beautifully restored 1967 Mercedes-Benz 250SE cabriolet owned by Mark Ford. Mark purchased our featured Mercedes-Benz via eBay from Louisiana, USA. From all accounts the car appeared to be in average to scruffy condition and was originally painted white with black interior. Further investigation revealed that Dr Carl Rice of Minneapolis, Minnesota, had originally ordered the car for tourist delivery, collecting it from the factory

on December 28, 1966 as a 1967 model year car. Dr Rice had specified it in off-white with an anthracite grey leather interior and manual transmission. A Becker TR Europa AM/ FM radio was added by a dealer in Germany while the Rices toured Europe in their new car.  Although a fairly basic specification, the car’s delivery price was US$10,000 (an auto transmission would have added US$339 to the purchase price) at a time when an E-Type Jaguar sold for US$5870!

Receipts obtained with the car show it stayed in the Rice family for some time before spending a few years in California during the 1980s. Eventually it found its way to Baton Rouge, Louisiana in the late 1990s — and it was from there Mark bought the car in 2007 with a view to restoration.

Once the Mercedes was in New Zealand, Mark carried out some initial disassembly at his home — removing the engine, transmission and some of the interior trim — which revealed the true extent of what would be required to bring the Mercedes back to life again. Like most older convertibles and cabriolets once they’ve reached that point in their lives that they have become unloved and neglected, water seeping in over time had led to rust slowly eating away at anything made of steel.

As with any old car, this Mercedes held a few surprises — both pleasant and unpleasant. It was built at a time when
the steel was good but galvanizing and rust protection were largely unknown concepts, and a life spent largely in the north-east of the US had taken its toll, with rot in the chassis and body. On the plus side, at some stage a number of exterior panels had been replaced, so they were largely clean with just a few scrapes and dents. The underside — with Benz’s notorious double skin construction — was another story. The initial assessment was that a baby’s head could be passed through some of the holes in the footwells and in other areas of the floor pan. With the assessment complete, the next step was to hand the Mercedes over to the talented team at The Surgery for a complete restoration. Their brief was to make this car ‘drivable first and watchable second’, and they delivered. Believe me, this car is stunning. 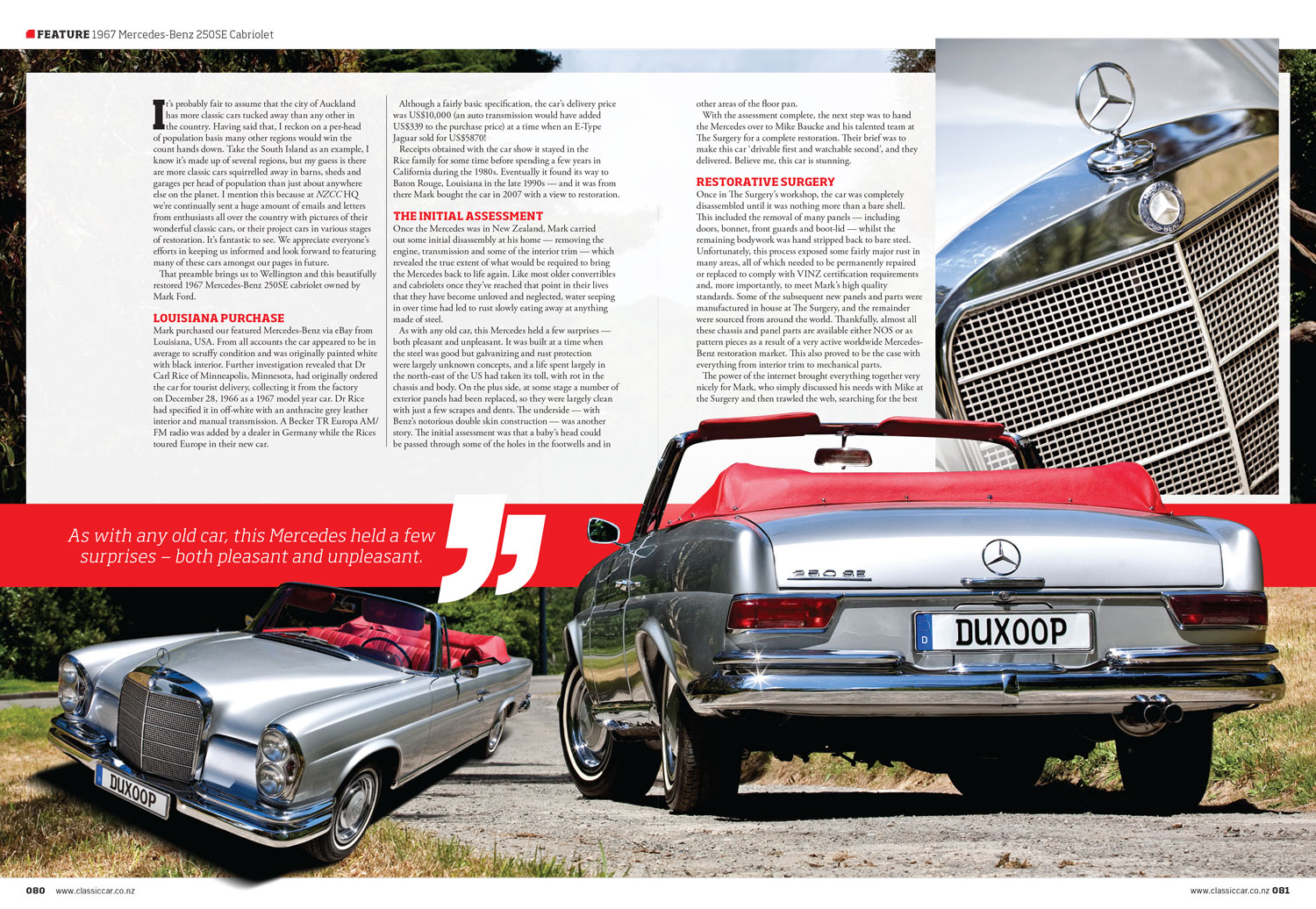 Once in The Surgery’s workshop, the car was completely disassembled until it was nothing more than a bare shell. This included the removal of many panels — including doors, bonnet, front guards and boot-lid — whilst the remaining bodywork was hand stripped back to bare steel. Unfortunately, this process exposed some fairly major rust in many areas, all of which needed to be permanently repaired or replaced to comply with VINZ certification requirements and, more importantly, to meet Mark’s high-quality standards. Some of the subsequent new panels and parts were manufactured in-house at The Surgery, and the remainder were sourced from around the world. Thankfully, almost all these chassis and panel parts are available either NOS or as pattern pieces as a result of a very active worldwide Mercedes- Benz restoration market. This also proved to be the case with everything from interior trim to mechanical parts.

The power of the internet brought everything together very nicely for Mark, who simply discussed his needs the team at the Surgery and then trawled the web, searching for the best options and pricing (and significantly improving his grasp of the German language along the way). The local Courier Post delivery guy became such a familiar visitor to Mark’s home that parts handovers were often accompanied by questions as to how the project was progressing.

And progress was being made, with the now bare shell mounted onto a special jig to support the body and chassis while the rusted floors, sills, rear quarter panels, rear inner guards, boot floor, engine bay panels and inner front guards — to name but a few — were cut out in preparation for new panel work.

The straightening, panel beating and finishing of all the bare steel bodywork to remove years of minor (and some major) panel damage was meticulously carried out. Special attention was put into getting the factory body swage lines just right. Once the body shell was complete then it was time to apply the PPG two-pack epoxy etch primers, high build undercoats, and two-pack clear-coat over base-coat to provide a show car finish not only to the exterior of the body, but also under all the wheel arches.

As the car had arrived on our shores in quite a rough state and with a number of non-original features, the owner
was relaxed about making it as he wanted, rather than sticking to strict factory originality. The ‘as delivered’ colour combination did nothing for him, so he was more than happy to recycle the car with the classic silver and black over red combination. Interestingly, this replicates a 1969 280SL he once owned and, although the silver is classic colour choice for a Mercedes-Benz — á la Silver Arrows — the shade chosen by Mark is actually a 1966–’73 Porsche blend, the same colour used on a 1973 911 he also owned.

Repairs and metal finishing of bumpers, hubcaps and mouldings were then carried out and the wonderful chrome plating work was completed by Wanganui Electroplaters.

The next stage was to tackle the interior of the car, which included just about everything from new carpets, leather seats and door panels plus trim panels to the soft top identical to the factory original and completed in house at The Surgery.

The interior woodwork is a special feature of these hand- built Benzes and restoration of the veneer is not a task for the faint-hearted, as much of the interior wood sections are only 0.39mm thick and look to be a never-ending combination of compound curves. Many restored examples have the veneer over the instrument binnacle replaced with a vinyl or leather cover as seen on the contemporary sedans, as auto-trimmers throw up their hands at the thought of correct wood restoration or admit defeat after touching the finish with even 800 grit abrasive paper. 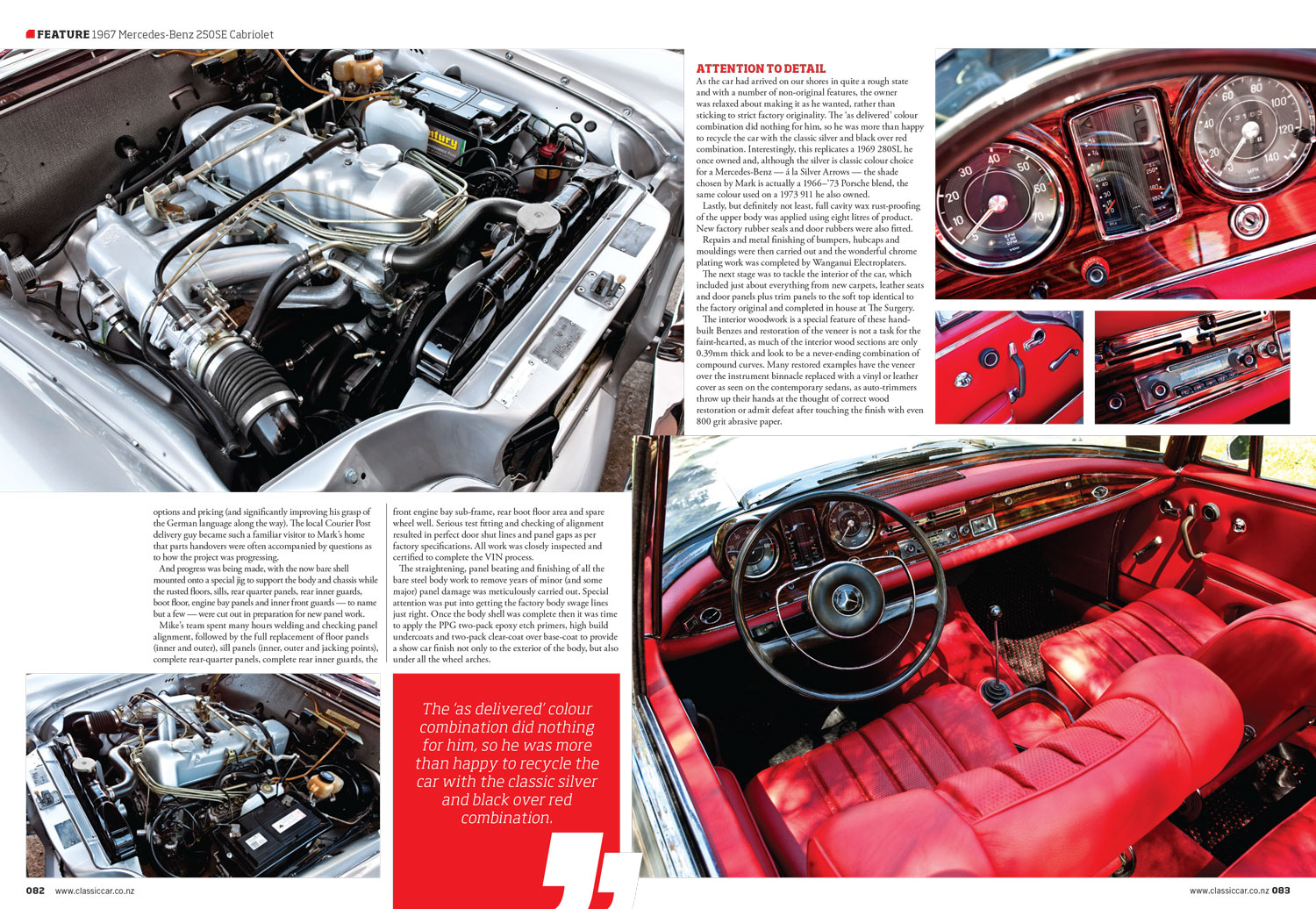 Thankfully for this example, Mark was not prepared to settle for second best and after some quick research through the internet unearthed Drew Tibcken, of Heritage Woodworks in Andrews, North Carolina, as the best in the business for these early Benzes. The finished handiwork on this dash testifies as to how well-deserved his reputation is.

The electrical system was next on the agenda, with at least 40 percent requiring a rewire to repair and restore the wire loom to as-new condition, including new and restored light fittings. The icing on the cake — a brand new, period-correct factory Becker radio.

Finally, in order to get everything back into roadworthy condition, the Mercedes’ suspension was completely stripped, sandblasted, repainted in two-pack gloss black and fitted with new bushes throughout. New shock absorbers and brakes were also fitted. And, of course, the car’s 2.5-litre straight six was treated to a full overhaul, as was the car’s four-speed gearbox. The engine and engine bay were totally detailed with fresh paint, plating where appropriate and
received lots of polishing — all of which means this 250SE’s under-bonnet now looks to be way beyond usual factory standards.

Once completion and assembly (including refitting the engine and running gear) was complete Mark reckoned the best part was the test drive, and he was delighted when he found that the freshly restored Mercedes drove just as well as it looked. The final step was to take the car through the VIN process — the Mercedes passed without a hitch first time.

According to Mark, his new ride is solid and usable on a daily basis without the need to make the usual concessions for the car being a convertible and over 40 years old. Having built it to be used, much of The Surgery’s best work on this Mercedes is not visible — and that includes the aircraft-quality space-frame, two-part primer, the waxed cavities and hand fabricated repair panels.

On completion, the official handover and unveiling of the fully restored Mercedes was held at the Museum Hotel, complete with cake-cutting, champagne and press photographers — all rather fitting for such an aristocratic cabriolet. 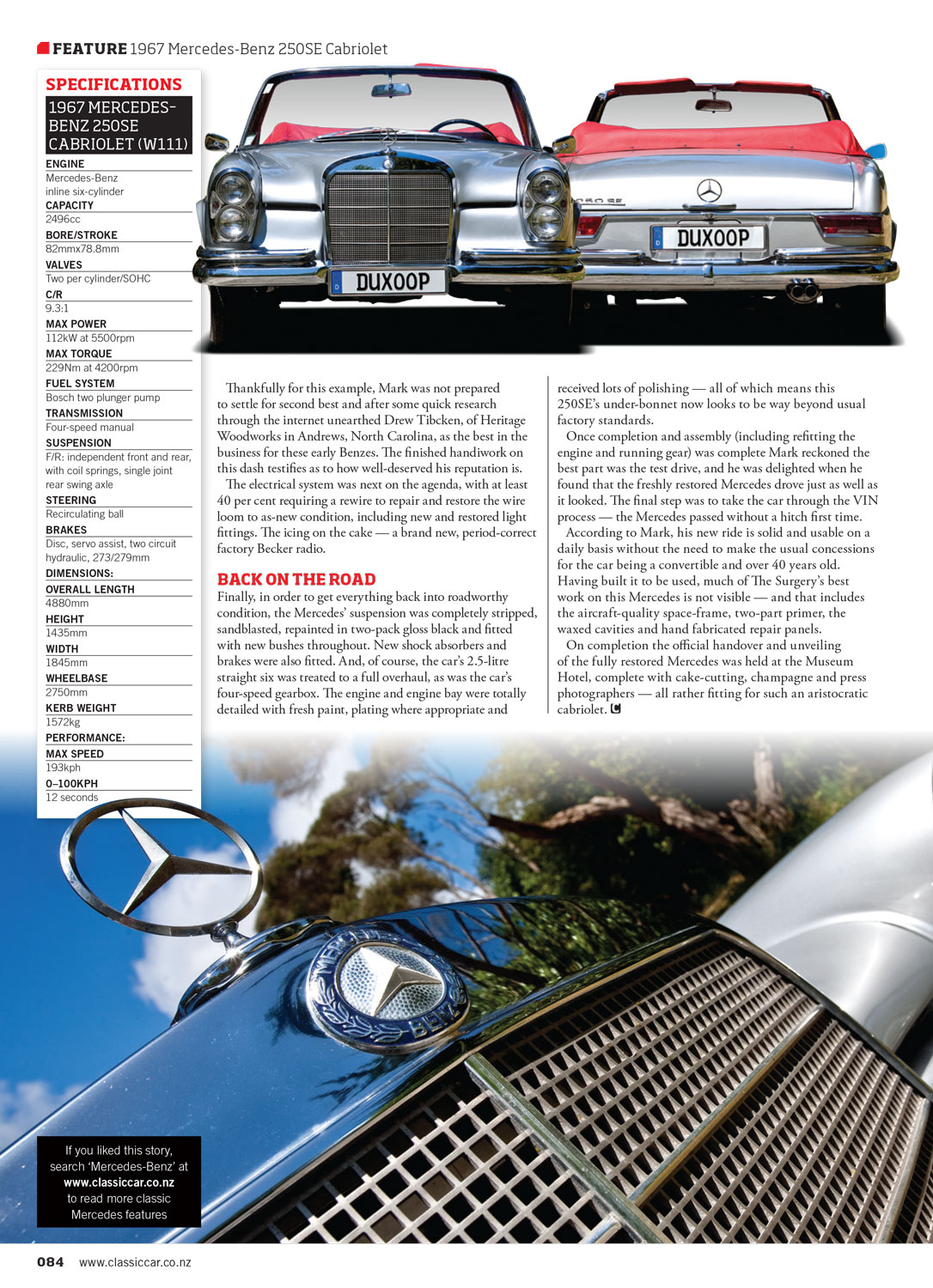